So I have this bathroom.
It’s an ordinary bathroom, with a basin, toilet, bath tub and light blue tiles.

I’m not much of a blue person, but they are OK.
And they crave to be decorated.

So I thought about doing some kind of underwater, deep sea, landscape thingy with lots of fancy fishes, jellyfish and algae …

I’d like to use windowcolor again, because it is removable and as I’m living in a rented flat I’m not allowed to make permanent alterations, even if they are really, really gorgeous.
That’s Swabia for you.

Naturally I’d like to do art noveau style again.
Also I’d thought about doing it a bit more like a repeating pattern. One piece over and over again. With small alterations of course. There should be some tiled feeling about the whole thing. (I’m talking about the area around the bathtub, not the window – in case you’re wondering)

So, here is my first sketch for a unit of underwater landscape:

No, it’s not a „Themaverfehlung“, it’s just the way my brain works.
It’s not ab big step from underwater to marshy landscape – at least it’s not a space station. (I’m watching DS9 at the moment … )

I’ve got my models from two books.

This one I have also in my PC. The manipulated, gray version looks like this.

I’m planing on doing pieces with both variations. I just like them all very much and can’t decide which one to take. So I’ll rotate.

And here’s a first picture of a blue iris: 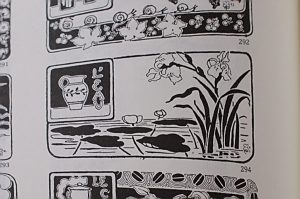 What do you think!?!

Ein Gedanke zu „The Yet To Be Named Bathroom Project“