I’m a bit worried about the Tolkien stuff.

There ist so much of it! I’ve already moved it to a langer level, but there is still more to come. 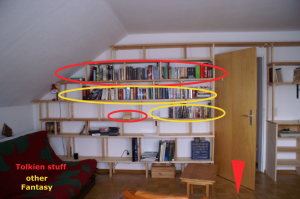 I think I’ve bought 1 ‚Hobbit‘ and 1/3 ‚Lord of the Rings‘ and I think my boyfriend, who is not here to confirm it, has bought about 1 set and a few of the secondary works.

I think we have to many books. Books are good. Need more books.