In our kitchen there is a part that is tiled and one that is … not.
The edge between these two variants stretches across half the room and I think it’s the perfert location for a parade. 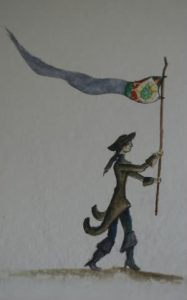 I don’t know how your crative process works, but when I set out to make something most of the time I only have a vague idea about what it’s going to be, but not more.

Same one this time. I thought about parades, an lets NOT do something female this time, no long fluttering skirts, no big hair … ok, trousers then, trousers it is, and a frock-coat – I’m a sucker for frock-coats – and there he was, walking past, saying „remember pirate? – those were the days, eh!?!“

Lets do something pirate …

So, here’s to awsome, and to let’s do it again sometime!