I’ve given the matter some thought and of course I strongly reject that notion!
What I’ve written was Not Sonnenuntergans But Sonnenuntergans-zeit,
meaning ‚Time of the Sunset-Goose‘
and that’s a real thing.
It looks like this: 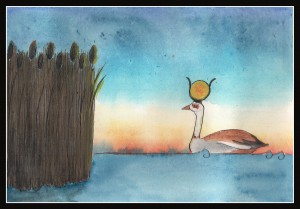 You may not have encountered it, because you only see it only in the Levant,
and even there it’s quite unusual.
The sunset goose (funnily enough the Egypt god ‚Geb‘ is associated with a mythological divine creator goose who had laid a world egg from which the sun and/or the world had sprung. You find drawings of a man/god with a goose on his head) carries the sun behind the reeds where it sets in peace waiting for the next day, when the sunrise duck wakes it from it’s deep sleep.