It started already in 2007, when I begun to try to draw everyday, if possible.
I created a lot of output back then (I’m still in the process of … eh … processing the pictures), but it was in 2009 that I went the whole way and really made it obligatory.

It was fun, after a year I ended up with six sketchbooks and a pile of lose paper, and no motivation left whatsoever.
I did not draw much in the following time, I tried some times but it just wasn’t the same. Then I moved, got a new job, worked far to much … Occasionally I sit down an paint a little, but it just is not the same. There are no ideas, not great images that form themselves in my head, no pictures that want to be painted.

You know they say that inspiration is like any other muscle, it needs to be trained.
They, being other I-have-to-do-this-in-german Kunstschaffende. It means art producing people. It’s a very unsexy and a very, very German word.

Yesterday my order from Bösner arrived, financed by my cousin, who, I’m sure, has no idea how much I really apreciated that voucher…

So I’m all set up. There is sketch pad that will last well over a year, there is ink, reinforcement on the watercolour front, chalkboard paint (I always wanted to have a DIY-chalkboard) and other stuff that does not concern you either …

I’ve decided to draw in a smaller format,  in DIN A5.
(Which also is one of these strange German inventions trying to bring order to the world)
It means the paper measures 14,8 x 21,0 cm.
Hopefully this will let me find room to store the paper someday …

I’ve already started. Not on January, 1th, because in my experience New Years resolutions are bound to fail. No, I started a few days earlier, and I’ve drawn since then. It was hard at first, but I think the feeling starts to come back again. Yesterday I drew my the first one I’m really satisfied with. Can you find it? 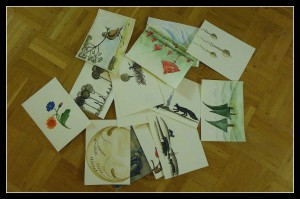 I’m not sure how much this will concern you anyway.
Maybe there will be a monthly review?
A small ‚best of‘ show?
I don’t know.
Mainly I’m telling you all of this because once I’ve done it, it means I have to go through with it. Because you know

If it’s on the Internet, then it has to be true.