I have a friend who is deeply into Origami.
He made me this tesselation – just for fun.

I’m not a very accurate person, Origami was always some sort of my Nemesis for that.
But twoday I sat down used up all my wrapping paper and folded some birds.

I started with this dove. 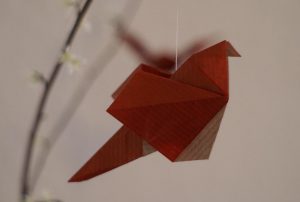 I made a rooster too, and a canary, but with the last scrap of paper I made this flying bird, which is more or less the thing I was aming at. 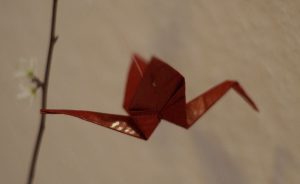 Here you can see the „square“ in the middle: 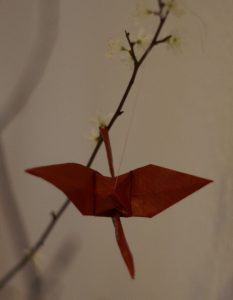 Memo to self: buy Origami paper (the hardest part was to cut a square that really is a square)

As I said,
sometimes easy is not enough.
Sometimes you have to go for the stuff that’s a tiny bit more difficult.
Sometimes you just can’t resist.
There’s a whole world of folding out there. I’m scratching just the surface.